Reports are out claiming that Liverpool have extended the stay of goalkeeper Simon Mignolet. 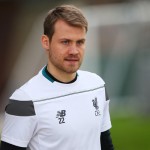 The 27-year-old Belgium international has put pen to a new contract which will see him remain at Anfield until 2021.

Mignolet, who joined the Reds from Sunderland in 2013, expressed his gratitude to the Merseyside club after he completed the signing of the long-term deal.

“I’m very pleased that I can be at Anfield and a part of Liverpool for a long future. I’m happy to commit my future to LFC,” he toldLiverpoolfc.com.

“I know signing a new contract comes with new responsibility. I’m getting older as well and coming into the years where people would say those are the years a keeper is at his best.

“I know with a long-term contract, you get more responsibility – and I want to take up that role, because I’m the sort of character that wants to be a leader, wants to speak in the dressing room and wants to help the defence.

“I’ll try to work hard together with the goalkeeping coach and staff here, who are behind me and have given their confidence with a new contract.

“I would like to thank them for that but you can’t really do that with words, you have to do that with performances on the pitch and that’s what I’ll try to show.”

Since arriving at Liverpool, Mignolet has made 122 appearances in all competitions for the Reds. Can A Club Actually Buy Success in the Premier League? (infographics)