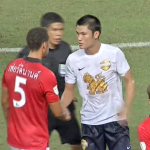 United fielded a side missing the likes of Wayne Rooney, Nemanja Vidic, Nani and Robin van Persie as they kicked off their pre-season tour of Asia but few could have predicted defeat, influential Singha captain Winothai wrongfooting Ben Amos to score the decisive goal early in the second half.

United had their chances, Adnan Januzaj blazing over in the first half before both Danny Welbeck and new signing Wilfred Zaha squandere good chances, the latter cannoning a shot against the post.
But the Thai side were value for the victory and could have had more themselves as United struggled to find any rhythm at the start of their Asia tour.