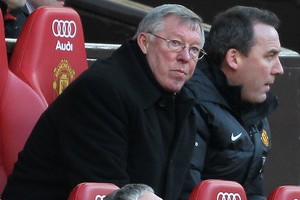 Manchester United boss Sir Alex Ferguson has accused Bayern Munich players of threatening the referee so they could get a Red Devils player sent off.

Just after the half-hour mark of the Champions League quarter-final second leg at Old Trafford, United defender Rafael was sent from the pitch for a second bookable offence but Ferguson believes it was the actions of the Bayern players that really persuaded the official to make the decision.

“It was 35 yards from goal,” said Ferguson of Rafael’s tug on Franck Ribery.

“There was no threat and the referee wasn’t going to do anything about it until they surrounded him. It is typical of Germans. They are like that.”

Despite winning the return leg 3-2, Manchester were knocked out of the competition because of away goals after the tie finished 4-4, leaving Ferguson to consider what might have been.

“It is hard to digest something like that,” said Ferguson. “It was a top performance.

“In one way you could say we have thrown it away, in another you could argue we were very unlucky.”