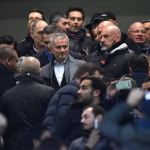 It has been reported that Winning the FA Cup won’t save Louis van Gaal’s job at Manchester United.

The Mirror says winning the FA Cup will not be enough to save Van Gaal, as United are preparing an exit strategy for him and a succession plan involving Jose Mourinho.

Opposition to the Special One’s appointment, from Ferguson and fellow club legend Sir Bobby Charlton, is understood to have eased with senior figures now accepting the need for change if United are to progress.

And despite his bullish public front, it is understood Van Gaal accepts his reign has reached a defining moment — even though they still have a chance of winning silverware this season.

There is a growing belief among senior United officials that they will soon have to strike a deal to settle the final year of the Dutchman’s £6million-a-year contract.