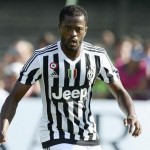 It has been reported that Juventus fullback Patrice Evra has revealed Sir Alex Ferguson told him Cristiano Ronaldo would rejoin Manchester United in 2013.

The French international says Ferguson expected Ronaldo to return from Real Madrid after he announced his retirement.

He told the Sunday Times: “Sir Alex was 99% sure that Cristiano Ronaldo would come back to United, two weeks after the manager announced his retirement.” Arsene Wenger : Rooney Should Go To The European Championship!