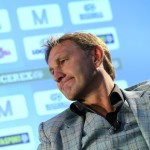 Reports are out claiming that Sir Alex Ferguson admits he tried to sign Tony Adams for Manchester United.

Adams was swayed to stay at the club by Arsenal’s top brass and tripled his pay packet in the process.

But Ferguson believes Adams’ all-action defending matched with the style of his United sides.

“I think Tony Adams was a United player in an Arsenal shirt to be honest with you,” the Old Trafford great told Sky Sports.

“I thought he would have been absolutely perfect for United. I tried a little bit [to sign him] when he was 19 and in the reserves but there was no chance.”

Adams made 669 appearances for Arsenal during his 22 years at the club.