It has been reported that Sir Alex Ferguson believes Mino Raiola is to blame for Paul Pogba’s departure from Manchester United. 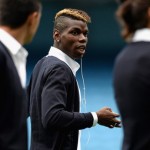 Ferguson was in charge at Old Trafford when Pogba left for Juventus in 2012 and the talented French midfielder has come along in leaps and bounds since his England exit.

Regarding Pogba’s decision to leave United, Ferguson revealed that the 22-year-olds agent Raiola had a lot to do with the free transfer.

In his new book, Leading, Fergie stated: “There are one or two football agents I simply do not like, and Mino Raiola, Paul Pogba’s agent is one of them.

“I distrusted him from the moment I met him.

“We had Paul under a three-year contract, and it had a one-year renewal option which we were eager to sign.

“Raiola suddenly appeared on the scene and our first meeting was a fiasco. He and I were like oil and water.

“From then our goose was cooked because Raiola had been able to integrate himself with Paul and his family and the player signed with Juventus.”