It has been reported that Sir Alex Ferguson feels Louis van Gaal’s Manchester United will improve once he settles on a back four. 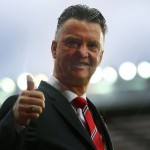 Lamenting United’s injury woes during Van Gaal’s embryonic tenure, Ferguson said once he settles on a regular back-four the club will progress quickly.

“He has that philosophy, stubbornness and determination to succeed, I’ve got every faith he will be a success,” said Ferguson, in an interview with James Nesbitt at London’s Drury Lane Theatre.

“I have absolute faith that he’s the right man for the job.

“It’s been one step forward and two steps backward for them so far this season, in terms of injuries.

“Falcao looks a player and Di Maria will do well.

“Once he can get people fit and a settled, regular back-four, then that’s the first route to progress.”