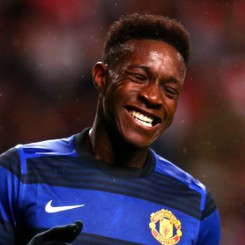 Manchester United manager Sir Alex Ferguson has made it clear that Danny Welbeck is a very important member of the squad.

The 21-year old striker has spent a lot of time on the bench for the Old Trafford outfit lately with Ferguson preferring Wayne Rooney and Robin van Persie in attack.

However the Scottish tactician insists that there will be plenty of action forthcoming for the England international.

“It’s difficult for me (to leave Welbeck out),” Ferguson said.

“Robin van Persie has come in, we’ve got Wayne Rooney. You tend to rely on the experience of these players.

“What we’ve got to try and do is alternate selections so that Danny feels he is making a contribution. At the moment, we’re tending to play him wide left, which I think he is capable of playing.

“He can still provide a certain type of threat from that position and he’s done that many times over the years. But I think he’s a natural centre-forward and he will get opportunities.

“He has shown with his form for England that he can be a real asset to us through the middle. He’s a good goal threat.”