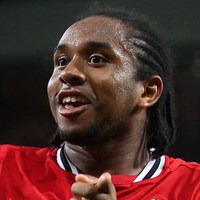 It has been revealed that Sir Alex Ferguson is delighted with the form of Anderson.

The Brazilian international midfielder has impressed in the opening games of the season.

Ferguson told Inside United : “He has been tremendous,”.

“He’s had a couple of long-term injuries which haven’t helped him, but in the last year or so, he’s steered clear of injury.

“That means he’s training every day so his fitness levels are much better. He is maturing so you can see the consistency in his game.”