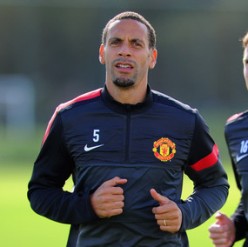 Sir Alex Ferguson has revealed that he no longer has concerns with Rio Ferdinand’s fitness.

The 33 year old central defender has persisted under the shadow of injury in recent seasons and the Manchester United boss is adamant that only by controlling his fitness and rationing matches can he sustain his level of ­performance.

“When he first started with the back problems, he was out for longer periods,” Ferguson said.

“Now, we just take care in the training. He is doing yoga and all these things are contributing to his being fit and that’s good. He uses his experience now. Six or seven years ago, he had such a great change of pace he used to leave it almost until the last second to turn on the gas and get there.

“Now, he can’t do that. As everyone else, they lose their pace as they get older and he is using his experience to compensate for that. He is not taking any chances now.

“Rio has been here 10 years and we are one of these lucky clubs that can keep players for long periods. He is very good with young players. He has a manner with them and is well-respected.” I Won’t Change My Style Of Play! – Phil Jones