It has been reported that Manchester United legend Sir Alex Ferguson says they didn’t sign Wayne Rooney as a striker. 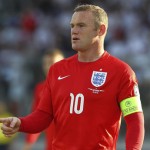 “I would never have thought that, we didn’t recognise him as an out and out goalscorer, the evidence wasn’t there – he looked an outstanding footballer and that was the main reason we wanted him,” Ferguson told ITV Sport.

“It’s impossible not to recognise the impact Sir Bobby has on players – any time he came into the dressing room he’d have a word with Wayne and he’d appreciate it,” he added.

“This humble man, bald headed you’d say to yourself “is he a footballer?”