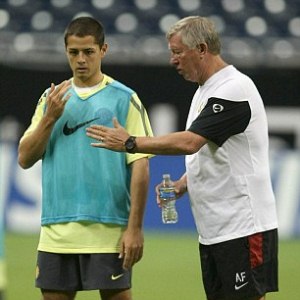 Manchester United boss Sir Alex Ferguson is full of praise for young striker Javier Hernandez after he scored a brilliant winner to put Manchester United through to the last eight of the Carling Cup.

The 22-year-old Mexican international, signed for £7million before the World Cup, came off the bench to score in the last minute of this topsy-turvy tie against Wolves and secure a 3-2 win.

Hernandez scored both goals for United against Stoke on Sunday and is fast becoming a new hero to a club traumatised by the Wayne Rooney saga.

Ferguson said: “He was absolutely brilliant – it was a magnificent goal. He’s shaped to shoot, dummied the defender and finished really well.

“They tend to build heroes quickly here but he’s justifying the praise at the moment.

“He’s very professional, the first out on the training ground and the last one back in every day and he’s rightly getting a lot of praise for his goalscoring.” Nani : I’m One Of The Top Players In The World!