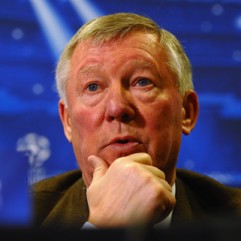 Sir Alex Ferguson is not ready to write off his title rivals.

United are at Manchester City this Sunday.

With Chelsea and Arsenal sliding out of the picture, and Liverpool having never been in it, even at this early stage, it appears to be a straight battle between the two Manchester clubs this season.

“At this time in the season you can’t really say it’s a two-horse race,” he said.

“If you think back we were 12 points behind Chelsea at one point and when Arsenal beat us in the league in 1998 we were 11 points clear.”