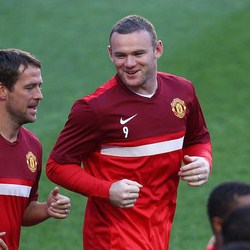 Responding to an observation from Benfica coach Jorge Jesus that Rooney is “more Brazilian or Argentinian” than English in the way he plays the game ahead of Wednesday night’s Champions League encounter with United at the Stadium of Light, Ferguson made his own comparison.

“He was a very aggressive attacker as well who could look after himself. So can Rooney. There are similarities that way in strength, speed and determination.

“But he is white, completely white.”