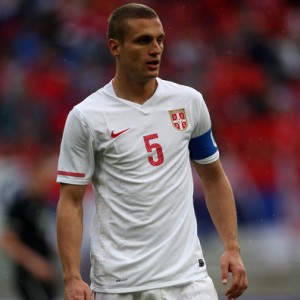 Manchester United boss Sir Alex Ferguson has dropped the bombshell that Nemanja Vidic’s future at the club is in question.

The Serbia international defender is currently on vacation after participating in the World Cup and when asked about speculation that the 28-year-old may leave Old Trafford, Ferguson said: “I can’t clarify it at all.”

When pressed and asked whether the Serb would play for the Manchester team this season, Ferguson replied: “I believe so.”

Vidic has been linked with Real Madrid and Barcelona for some time now but has remained loyal to Ferguson and Manchester United so far.