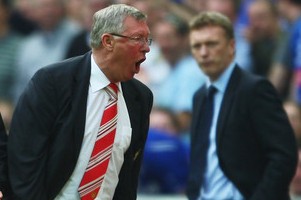 Manchester United manager Sir Alex Ferguson has reportedly backed Everton’s David Moyes to take his role once his time at Old Trafford is up.

Reports suggest that the Scottish tactician will end his tenure with United at the end of next season and he apparently wants fellow Scot Moyes to take the coveted post.

Ferguson is of the belief that the job should be given to a British manager rather than an outsider and has named the Toffees mentor as the man to lead the Red Devils into the future.