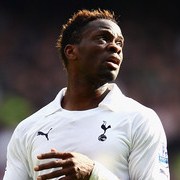 Sir Alex Ferguson is wary of the threat of Louis Saha with Tottenham.

He told Inside United : “I don’t know the circumstances behind Louis Saha’s transfer but Everton were happy to let him go,”.

“And then he goes to Spurs and scores two goals [against Newcastle]. That’s typical of Louis. He’s got tremendous talent, he just doesn’t play enough.”

“He is a handful, no doubt about that. He’s got two great feet, he’s quick, he’s got a good spring in the air. There’s no doubt he is a handful. They’ve got a fantastic squad, and a goal threat throughout the team. Gareth Bale contributes, Rafael van der Vaart, [Jermain] Defoe, [Emmanuel] Adebayor. They’ve got goals in their team.”