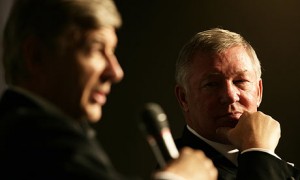 Wenger is now the longest-serving boss in Arsenal’s history and much of those 13 years at the Gunners have been spent going toe-to-toe with Fergie for the game’s big honours.

While there have been plenty of confrontations, the pair have fostered a mutual respect in recent years and Sir Alex said that Wenger has brought the best out of Arsenal.

Sir Alex also added that since Wenger joined Arsenal, the success of the club has been fantastic and that Wenger is the type of manager who sticks to what he believes in and so do his players.’

He also added that this is the reason why Wenger has been at Arsenal for so long. Sir Alex also revealed that he read some quotes from the Arsenal players and said that it explains everything.

He said that the Arsenal players owe everything to Wenger and that it is nice to see it that way.

Ferguson, who has been United boss for 23 years, said that looking at Brian Clough, himself and Arsene, it proves longevity brings rewards.

Sir Alex went on to say that Wenger’s team plays the right way and that he has a stadium that is full every week.

Sir Alex ended by saying that Wenger has been an incredible manager for Arsenal Football Club and that there is no questions about that. 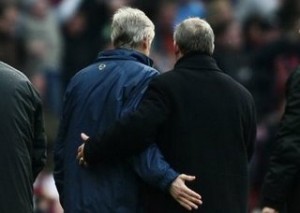