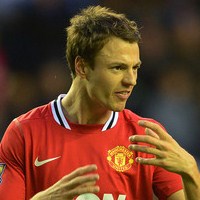 Manchester United manager Sir Alex Ferguson believes that Jonny Evans is one of the best defenders in the country.

The 24-year old Northern Irishman has stepped into the central defensive role with great effect following the season-ending knee injury suffered by Nemanja Vidic in December and has improved so much that his boss has suggested h is up there with the elite in England.

“”I must admit my heart sank a little when I learned just how long Nemanja Vidic was going to be out,” Ferguson wrote in his United Review programme column. ”

“He and Rio Ferdinand had become the cornerstone of our defence but Rio responded brilliantly, despite his back problem, and has now struck up a fine partnership with Jonny Evans.

“Jonny came to us from Belfast when he was 12 or 13, always exceptionally talented but gangly with physical issues growing up.

“We had him out on loan with Antwerp and Sunderland and now we are seeing the value of nurturing him.

“There is no doubt he has been helped playing alongside the experience of Rio and he is now arguably the best defender in the country.”