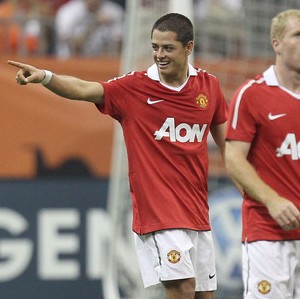 Ferguson has chosen Hernandez and Federico Macheda as the players to rival Wayne Rooney, Dimitar Berbatov and Michael Owen, once fit.

He said: “I need to keep Macheda and Hernandez, There was a lot of purpose in the way they played their football.

“To play for a club like this is not just about talent. You need something else and they’ve got something else. I am pleased with that.”

Ferguson is convinced Hernandez can play alongside Wayne Rooney.

He continued: “If we are talking about a combination with Wayne, I think we would need to adjust a bit. They are similar types of players.

“We will assess Hernandez really well and make sure we can bring him to good consistent form.

“There are still little things to do but not a great deal. One he gets used to our training I think he will be okay.”