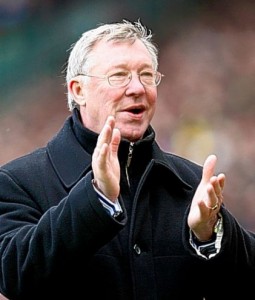 Manchester United manager Sir Alex Ferguson set his sights on leading the Old Trafford side to a record fourth successive Premier League title after his side went top of the table with a 2-0 win at Stoke.

Manchester United United will become the first team ever to win the English crown four years in a row if they manage retain the title this season and Sir Alex is confident that his team can last the pace after knocking Chelsea off top spot on Saturday.

After a tight first hour at the Britannia Stadium, United finally broke the deadlock in the 62nd minute when veteran midfielder Ryan Giggs, on as a substitute, slipped a pass for Dimitar Berbatov for a simple tap in.

United defender John O’Shea ensured there was no way back for Stoke when he headed in a Giggs free-kick in the 77th minute.

Ferguson later said that he wished that hewill be saying this (being top of the table) at the beginning of May and that there is a long way to go but it has been a good day for the team.