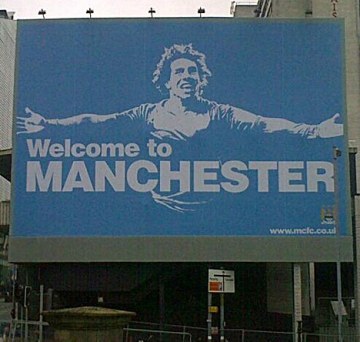 Manchester United boss Sir Alex Ferguson has slammed Manchester City over a poster campaign in the city, claiming that they are “arrogant”.

It is part of a long-running tactic from Manchester City fans to emphasise that they play in Manchester, while United’s ground is actually in the borough of Trafford. So far no one has admitted responsibility for the poster.

The poster has got Sir Alex riled, who feels they have taken it too far but he was quick to point out that City are only doing it as they feel inferior to the Red Devils.

The huge poster was erected at the bottom of Deansgate, which just so happens to be one of Manchester’s busiest shopping areas and the poster reads: “Carlos Tevez, welcome to Manchester.”

It is clearly meant to cause a reaction from United fans, who were desperate for Tevez to remain at Old Trafford after spending two years on loan at the Premier League champions.

Sir Alex also added that it is like one of those war adverts and he added that arrogance comes in lots of different ways.

Manchester City have also expressed similar sentiments on official merchandise in the past such as ‘This is our City’, ‘Greater Manchester’ and ‘Pure Manchester’ were all the brainchild of advertising agency Grey London and depict City’s pride in their roots.

Sir Alex also ended by saying that everyone must understand that when Manchester City get their moment to grasp for and to seize for, they are going to take it.