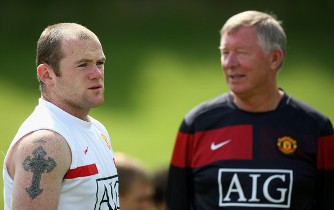 Interesting news are out and it has been reported that Manchester United manager Sir Alex Ferguson is expected to remind Wayne Rooney of his responsibilities ahead of his playing return tonight.

The Daily Mail reported that Wayne Rooney’s appearance in a friendly against a League of Ireland XI to open the city’s Aviva Stadium will be his first game since England’s World Cup debacle and a summer of controversy.

The England international was photographed smoking and urinating against a wall at the weekend during an ill-advised night out in Manchester.

Sources close to Rooney revealed that Rooney just wants to get back on the pitch after an extended break, but the least he can expect from Ferguson is a reminder about his duties.

Only last week the United manager said: “At Manchester United we don’t build a footballer just in terms of ability. We try to build their character to make them better human beings and to understand their responsibilities.

“They understand their job and I think that’s important.”

Lucas Moura Delighted To Be Linked With Manchester United