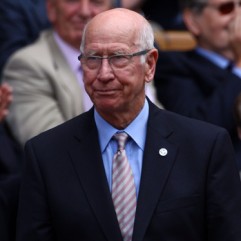 In a video message to the Soccerex global conference in Rio de Janeiro, the 1966 World Cup winner and Manchester United legend heaped praise on the current Red Devils hitman.

He said: “Wayne has the enthusiasm and talent to do it. With a fair wind he can do it and I would be very happy with that because I like Wayne.

“I get the opportunity to speak to him every other week and he is not a bad lad. He is a good lad who loves the game and wants to be the best.

“I can see in him what I used to see in myself. He can’t wait to get on the football field and he is magic. I have a lot of time for him because he is a good listener.

“I once said to him ‘Can I give you a tip that might help? Don’t be afraid to shoot. When you look up to have a shot, just smash the ball towards the goal as hard as you can. If you can see that rectangle, just smash the bloody thing’.

“We played Hull the next day and he did exactly that and scored!”