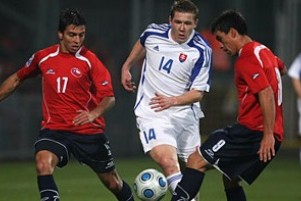 Esteban Paredes scored early in the second half to give Chile a 2-1 friendly win over fellow World Cup qualifiers Slovakia on Tuesday which earned lavish praise from the opposing coach.

Tuesday’s match suggested Chile were more likely to spring a surprise in next year’s finals in South Africa as the home team were often made to look slow and lumbering.