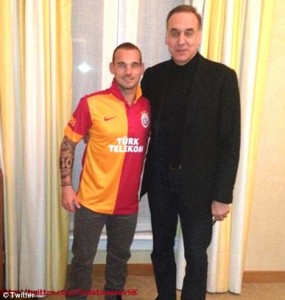 Galatasaray have agreed a deal to sign Holland midfielder Wesley Sneijder from Inter Milan, the Turkish club have confirmed.

The 28-year-old has been locked in contract talks with Galatasaray since Inter accepted an £8.3 million bid for his services two weeks ago, and has put pen to paper on a deal believed to be worth £120,000-per-week.

A statement on galatasaray.org read: ‘The transfer of Wesley Sneijder from Inter Milan has been agreed.

‘The conditions of the deal will be made public and the player will sign the contract after health checks.’

‘But we have to see on his wages, the man I think gets paid very well. He’ll have all kinds of options, I’m sure.