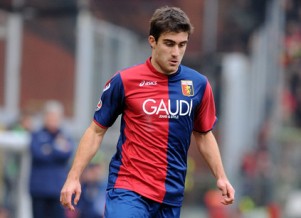 Genoa defender Sokratis Papastathopoulos has expressed his excitement after his successful switch to AC Milan.

The Greece international has joined the Rossoneri on-loan for the season after a successful medical on Friday.

Papastathopoulos was asked how he should be referred to by Milan fans.

“You can do it how you like,” he said. “Papastathopoulos is my surname, but it’s too long and it won’t fit on the back of my shirt, so I have chosen to put Sokratis on it instead. But my friends call me Papa and I like it.

“I am young, I have a lot of desire to learn and work. I will put myself at the service of the team. I am a central defender who, if there is the need, can play at right-back no problem.”

Papastathopoulos then gave his initial reaction to joining one of the biggest clubs in the world.

“Apart from the satisfaction, because I have touched the highest point of my career, I feel the responsibility of having shown who I really am.

“I will find a group of champions. I will have to integrate, listen, study and learn.

“First of all, I would like to thank my family: papa, mamma and my brother who have never left me and have allowed me to do what I wished for since I was a child and become a footballer.

“I admire Paolo Maldini, Nesta and Cannavaro. They are the greatest players that I have seen in action.”