Reports have emerged claiming that Sol Campbell believes Arsenal will not find it difficult to motivate themselves for Saturday’s North London derby. 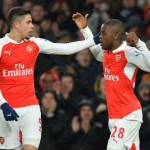 Arsene Wenger’s men sit six points off league leaders Leicester City and three behind second-placed Spurs which will give them all the impetus they need according to former centre-back of both clubs Campbell.

“Getting up for a north London derby is quite easy,” he told Arsenal Player.

“Getting up for it and making sure you are ready, and going through your pre-game stuff – it is easy.

“On top of it, when you played in north London, this time at the back end of the season, it is quite an important game. You are definitely up for it. It doesn’t take much.”

Campbell, who left Tottenham for Arsenal in 2001, added: “I used to thrive on these sorts of games. This time and the path of the season is so intense.

“There is even more on the derby now and it is even more important now to not lose and go for the wins and keep on the wins.

“You have to go for it. It is almost like when you are cycling and the team says, “let’s go for it” and you go for it.