Reports are out claiming that former Tottenham defender Sol Campbell has no regrets over his move to Arsenal. 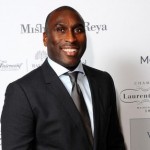 Campbell, 40, believes making the move was the best decision that he could have made at the time given Arsenal’s supposed superior set-up in 2001.

Campbell told ESPN FC : “It was a move that I needed to make; going to Arsenal was a big progression for me,”.

“Everything about Arsenal was better than Spurs at the time from the players, management to the mentality of the club and the facilities.

‘I wanted to improve myself as both a person and a footballer.

“It was a highly controversial move and Spurs fans have not forgotten it, but it was the best thing that I could have done for myself.” Arsene Wenger Hints Sterling Would Struggle To Get Into Arsenal Team