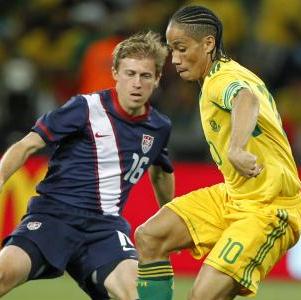 Juan Agudelo became the youngest U.S. player to score in the modern era, giving the Americans a 1-0 victory over South Africa on Wednesday that allowed them to avoid finishing the year with a losing record.

Agudelo, who turns 18 next Tuesday, scored in the 85th minute of his debut after coming on as a substitute midway through the second half.

Agudelo fed fellow newcomer Mikkel Diskerud, who maintained control despite being smothered by three defenders and played the ball back to Agudelo. He took one touch and banged the ball in off the crossbar from 7 yards out.

The teenager, who just made his first two starts for the New York Red Bulls in the MLS playoffs against San Jose because of a knee injury to Thierry Henry, dropped to his knees and thrust both index fingers in the air.