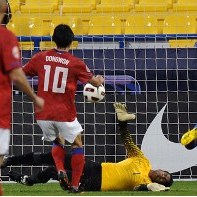 Ji Dong-Won grabbed a brace as South Korea outclassed India at a wet Al Gharafa Stadium to set up a mouth-watering Asian Cup quarter-final against Iran.

Koo Ja-Cheol and substitute Son Heung-Min also found the back of the net for South Korea, but Cho Kwang-Rae’s men will be left kicking themselves after wasting a hatful of clear-cut chances that condemned them to second place in Group C on goal difference thanks to Australia’s 1-0 win over Bahrain.

Their profligacy could prove costly for the Taeguk Warriors with the Socceroos now set for the seemingly easier last-eight tie against Iraq, United Arab Emirates or North Korea.