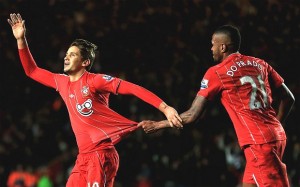 The Gunners scored seven goals against Newcastle on Saturday but could manage only one shot on target here, and that not until the 78th minute. Fortunately for them Guly Do Prado had already provided an own goal to cancel out Gaston Ramirez’s 34th-minute opener and at least secure them a draw.

The point was enough to lift Saints out of the bottom three but those home supporters who roared with delight at the final whistle may reflect in time that this was two points dropped rather than one gained, so abysmal were Arsenal. Since Southampton had played four games over Christmas to Arsenal’s three, fatigue could not be the reason. Maybe complacency was after the 7-3 defeat of Newcastle and the fact that Arsenal had thrashed Saints 6-1 at the Emirates in September.

Arsenal On The Verge Of Landing Shakhtar Donetsk Midfielder Jadson