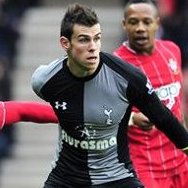 Tottenham Hotspur moved up to fourth in the Premier League table after beating Southampton 2-1 at St Mary’s in a classic ‘game of two halves’ contest.

Spurs were sublime in the first-half as they cruised to a 2-0 half-time lead on the back of goals from Gareth Bale and Clint Dempsey.

However, the momentum of the game flipped in the second-half as Southampton came to life while Tottenham cowered into their shells, and Jay Rodriguez made things interesting with his first Premier League goal for the Saints in the 68th minute.

The vast majority of the second-half was played in Tottenham’s half but Andre Villas-Boas’ men hung on for the three points despite the Saints’ best efforts.

Tottenham climb above Everton into a Champions League spot with the win but Southampton are second from bottom and their 26 goals conceded is by far the poorest in the Premier League.