An inspired Southampton earned a crucial win in their battle against relegation as they all but ended Liverpool’s top-four hopes.
The hosts stormed ahead when Jay Rodriguez nodded down for Morgan Schneiderlin to steer in a shot.
Rickie Lambert’s deflected free-kick added Saints’ second before Philippe Coutinho slotted in for the visitors.
Play media 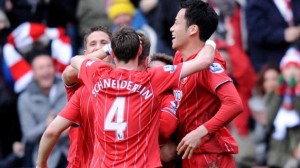 But Rodriguez completed a home win when he side-footed in after his initial shot was saved by Brad Jones.
At a rain-lashed St Mary’s, the final whistle was the signal for Southampton to revel in only a second win in eight games as they moved seven points above the relegation zone.