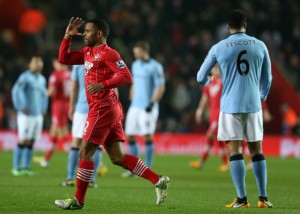 Manchester City boss Roberto Mancini stops short of conceding the Premier League title, but says it is hard to remain optimistic, after a 3-1 defeat at Southampton.

Strikes from Jason Puncheon, Steven Davis and a Gareth Barry own goal gave Southampton the win, with Edin Dzeko replying for champions City, who could fall 12 points behind league leaders Manchester United if Sir Alex Ferguson’s side beat Everton on Sunday.

Mancini said he felt as though his team played “with only two or three players” in the match, adding that he was “really disappointed” with his side.