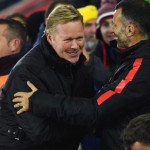 Reports are out claiming that Southampton boss Ronald Koeman is adamant Morgan Schneiderlin won’t be sold in January.

Tottenham and Arsenal both pursued the Frenchman in the summer but the club stood firm and Koeman insists even a large bid will not prise the 25-year-old away in the transfer window.