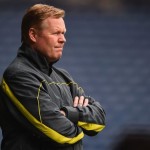 Reports are out claiming that Southampton manager Ronald Koeman has made it clear that the club is not looking to sell Jay Rodriguez.

The striker, 25, has missed the entire campaign with a serious knee injury but remains linked to Liverpool, Tottenham and even Manchester City.

But the fact Rodriguez has not stepped on the pitch under Koeman suggests to the Dutchman that he could be as good as a new signing next season.

“Of course I expect we don’t sell the player. The player didn’t play in my first season as a manager,” said Koeman.

“He’s good guy, a positive one and a good player, and maybe that will be the best transfer what we can do for the next season.”