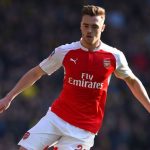 Reports are out claiming that Arsenal’s Calum Chambers is being targeted by his former club Southampton.

According to the Daily Star, the Saints could offer the 21-year-old a season-long loan as they prepare for Europa League football in 2016/17.

Chambers has struggled for regular game time with the Gunners since arriving in a £16million deal from the south coast in the summer of 2014 and it is understood that Ronald Koeman is keen to open the door for a St Mary’s return.

However, Southampton are likely to have competition from Crystal Palace, Bournemouth, Swansea City and Watford who have all been credited with an interest in the England U21 international.

Arsenal Lining Up Marco Verratti As Replacement For Mikel Arteta