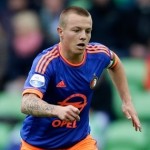 Koeman will move for his fellow Dutchman once Morgan Schneiderlin completes his expected move to Manchester United.

“He is one of the players on our list,” said the Southampton manager.

“Clasie is a good, young player.

“He’s an international who’s ready to make a step up and show his skills at a higher level.”