Dejan Lovren has declared that he is settled at Southampton. 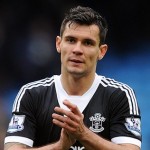 The 24 year old Croatia international defender has been linked with Liverpool in recent weeks.

“I also heard something about that,” he told Sportske Novosti when asked about Liverpool.

“I follow the media and I saw that Liverpool is allegedly interested in me. But that is all that I know so far.

“I feel great at Southampton and my contract is valid for the next three years.

“So the only thing I can say right now is that the club is the one who decides.” AC Milan To Send Mario Balotelli Back To Liverpool