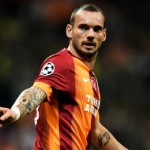 Reports are out claiming that Southampton boss Ronald Koeman is sending an SOS to Galatasaray midfielder Wesley Sneijder.

The Mirror reported that the Dutch international playmaker is one of several Galatasaray players to have had issues with the club over their pay in recent weeks.

And the cash-strapped Istanbul side are now seeking to get the former Real Madrid and Inter Milan play-maker off their wage bill.

Sneijder, currently on £50,000 a week net, shares an agent, Guido Albers, with fellow Dutchman Koeman, and the Saints are ready to back their new manager after seeing a sensational start to the season followed by five consecutive defeats – including a Capital One Cup quarter-final loss to League One Sheffield United.

He is understood to have earned £25milion net in the last five years and is willing to be realistic about any wage demands in the Premier League.