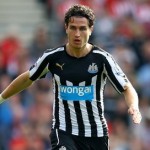 It has been reported that Southampton are chasing Newcastle United fullback Daryl Janmaat.

With Manchester United and Liverpool also monitoring the situation, Ashley is once again set to ignore the fans and sell to the highest bidder.

Saints boss Ronald Koeman sees his fellow Dutchman, who can operate at full-back or central defence, as the perfect replacement for Nathaniel Clyne.