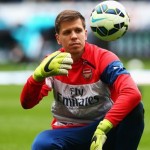 Reports have emerged claiming that Southampton are believed to be interested in signing Wojciech Szczesny.

The Sun reports that the Saints are eyeing a loan deal for the Arsenal goalkeeper who would act as number one in the absence of Fraser Forster.

The English gloveman is expected to miss most of 2015 after seriously injuring his knee in March and Southampton are looking for a top quality replacement.

Szczesny’s last Premier League appearance was coincidentally against the Saints on New Year’s Day but he has not featured in the league since after he was caught smoking in the showers.

However, the Poland international has been at the forefront of Arsenal’s run to the FA Cup final and is expected to take the gloves at Wembley against Aston Villa on May 30.