It has been reported that Southampton fans have met with Arsenal boss Arsene Wenger in Brazil to urge him to leave Morgan Schneiderlin where he is! 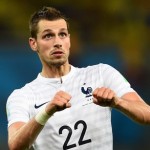 The France international is being linked with a move to Emirates stadium after the World Cup.

The Sunday Mirror reports during some down time from his media work, Wenger took to the beach to relax and play beach volleyball.

And one Southampton fan thought this would be the ideal time to ask him not to sign the midfielder – at a time where a number of the Saints top stars are leaving for pastures new.