It has been reported that Southampton midfielder Morgan Schneiderlin admits he feared for the club over the summer. 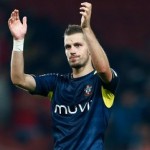 The French international midfielder has since fixed his relationship with the club and fans, but detailed to France Football one fiery meeting held as the mass exodus kicked off.

“I told them I signed for a project that was supposed to keep the best elements to go higher. And before that meeting, Lallana, Lovren, Lambert, Luke Shaw and Chambers all left. I asked myself: ‘That is not the same situation anymore, that is not possible. What are they doing?’

“At that moment, Southampton didn’t hire anyone yet. Chambers signed at Arsenal the day before our meeting. And the club started to see the fans were getting mad. They thought: ‘If Morgan will leave, the stadium will be burnt.’ So they guaranteed us: ‘Morgan is not for sale. We won’t listen to anything. Morgan will stay. That is the project. There is nothing more to say.’

“It was a real shock to me. I thought: ‘Why do they block me while I gave my very best and experienced everything with that club.’