It has been reported that Southampton are yet to field a new bid from Manchester United for Luke Shaw. 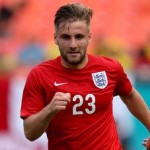 United tabled a bid of around £25m for Shaw back in May, but a national newspaper yesterday reported that Saints have received another offer of around £34m.

But it does not appear United have actually offered what would be a world transfer fee sum for a teenager.