It has been reported that Southampton boss Ronald Koeman fancies a shock move for Manchester United striker Javier Hernandez. 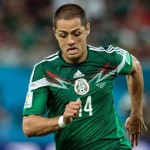 Koeman is in the market for a new striker signing following the sale of Rickie Lambert to Liverpool and Chicharito is on his radar, says the Mirror.

Only yesterday, Hernandez cast doubt on his future at United, complaining: “This whole year has been very tough. Players need confidence more than anything else, and I’ve been very short of it.

“Very few people have shown faith in me over this past year.”