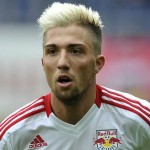 The Mirror reported that Slovenia international Kampl, 24, began his career with Bayer Leverkusen and refuses to rule out a return to the Bundesliga.

He has also revealed his dream of joining Arsenal and has been linked with Liverpool and Everton.

But Southampton, flying high in the Premier League under Ronald Koeman, are eyeing the possibility of a January move for extrovert Kampl.