Reports are out claiming that Southampton are refusing to do business with Tottenham over want-away midfielder Victor Wanyama, as the fallout from the Toby Alderweireld deal continues. 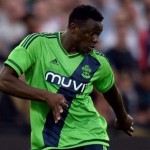 Wanyama is keen to push through a move to Spurs, to join former manager Mauricio Pochettino at White Hart Lane.

However, Southampton are reluctant to do a deal with Spurs, following their controversial hijacking of Belgian defender Alderweireld earlier in the summer.

Wanyama has enjoyed three solid seasons on the south-coast, and Saints manager Ronald Koeman has already said he would not be selling the Kenyan.